Bishop Thomas John Paprocki was ordained a priest for the Archdiocese of Chicago in 1978. After ordination, he studied law at DePaul University College of Law and was admitted to the Illinois Bar in 1981. Working as a parish priest at St. Michael Church in South Chicago, a neighborhood with high unemployment due to shutdowns of the local steel mills, then-Father Paprocki co‑founded the South Chicago Legal Clinic to help answer the need for legal services for the poor. In 2014 Bishop Paprocki was named President Emeritus and Of Counsel of the organization, now called the Greater Chicago Legal Clinic.

In November, 1985, Cardinal Joseph Bernardin appointed Fr. Paprocki Vice‑Chancellor of the Archdiocese of Chicago and in 1987 sent him to do post‑graduate studies in canon law at the Pontifical Gregorian University in Rome.  He completed his doctoral degree in 1991. Father Paprocki then returned to his previous position in Chicago as Vice‑Chancellor and was appointed Chancellor in March, 1992, serving in that capacity under Cardinal Bernardin and then under Cardinal Francis George, following Cardinal Bernardin’s death in 1996.

Concluding his service as Chancellor after two terms in office in June, 2000, Father Paprocki studied Polish language and culture at the Jagiellonian University in Kraków, Poland. In January 2001, he was appointed Pastor of St. Constance Parish, serving primarily a large immigrant community from Poland on the northwest side of Chicago. Pope John Paul II appointed him to serve as Auxiliary Bishop of Chicago on January 24, 2003. Cardinal George named him Liaison for Health and Hospital Affairs in the Archdiocese of Chicago. Bishop Paprocki serves as Vice-President of the Illinois Catholic Health Association. He is a member of the United States Conference of Catholic Bishops’ Committee on Canonical Affairs and Church Governance, the Committee on Budget and Finance, and the Committee on Laity, Marriage, Family Life and Youth. He formerly served on the USCCB Administrative Committee and the Ad Hoc Committee on Religious Liberty. In addition to English, he speaks Polish, Spanish and Italian, and he reads Latin. On June 22, 2010, Bishop Paprocki was installed the ninth Bishop of the Diocese of Springfield in Illinois. In May 2013 he received his Master of Business Administration (M.B.A.) degree from the University of Notre Dame. He taught as an Adjunct Professor of Law at Loyola University Chicago School of Law from 1999 to 2015. He joined the Adjunct Faculty of Notre Dame Law School in 2016.

Bishop Paprocki sat down with the Abraham Lincoln Presidential Library’s People of Faith – Mosaic of FaithsOral History, discussing his childhood, priesthood, and time in Springfield as bishop. 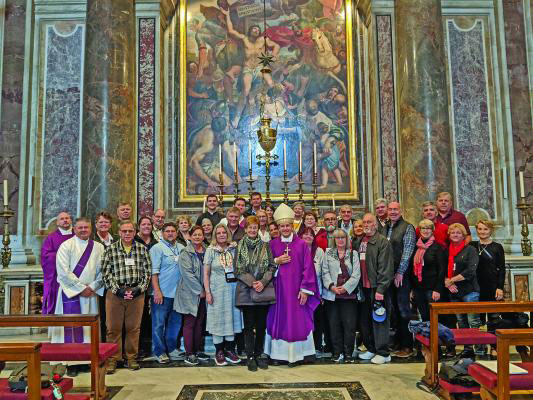 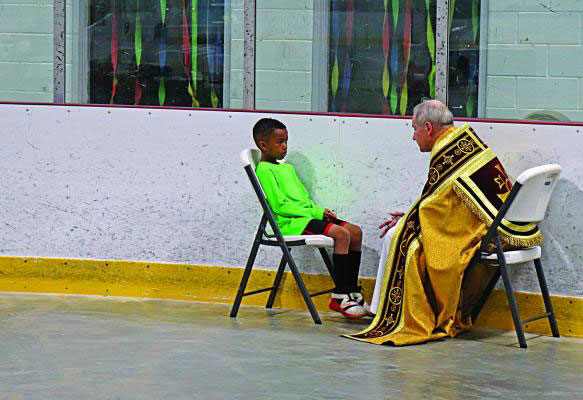 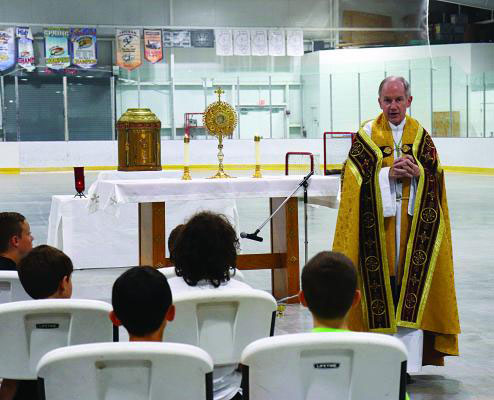 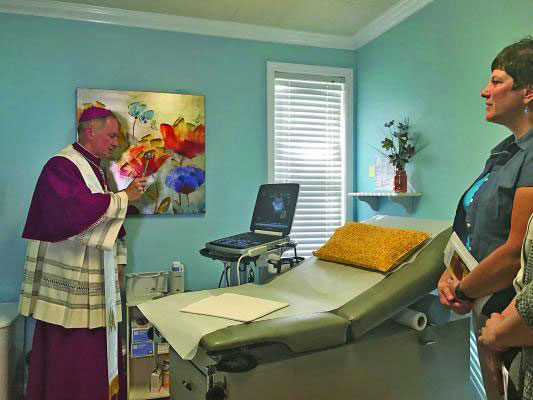 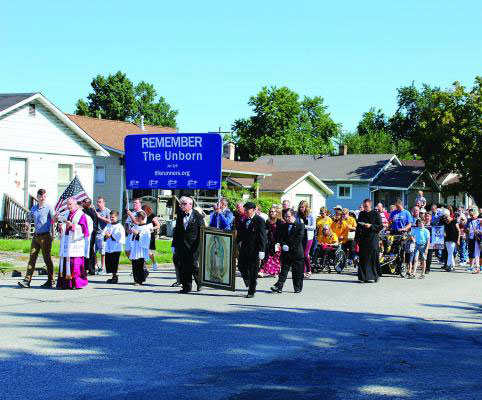 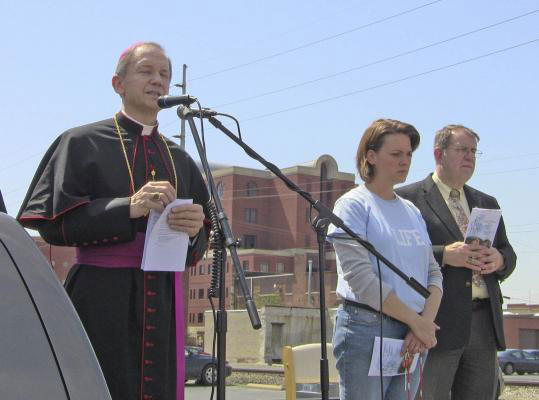 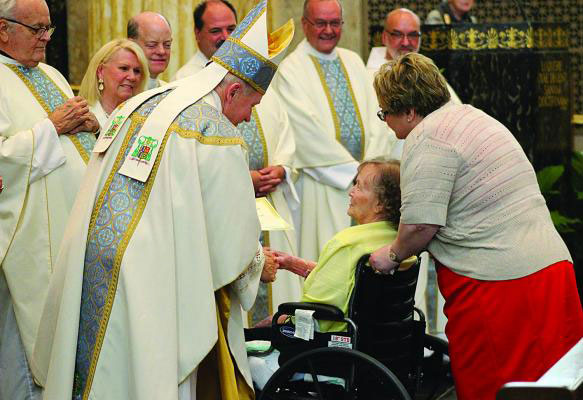 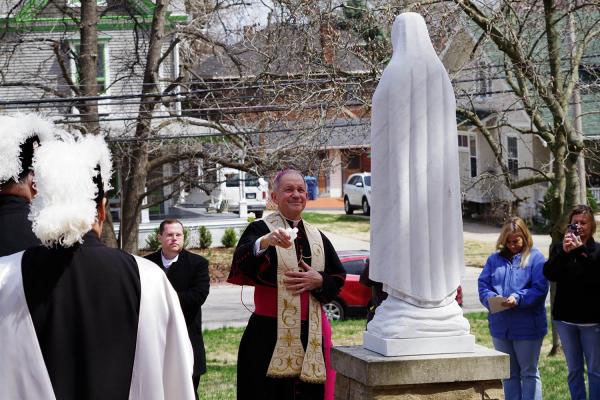 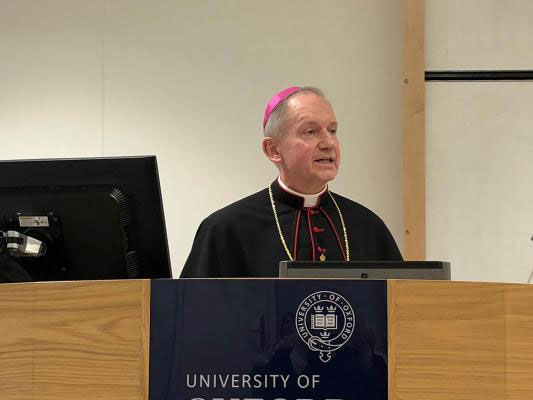 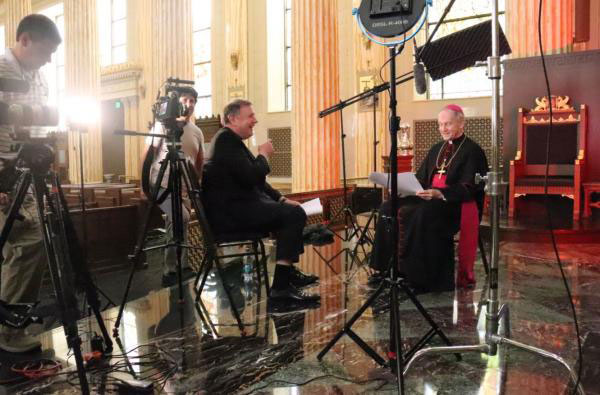 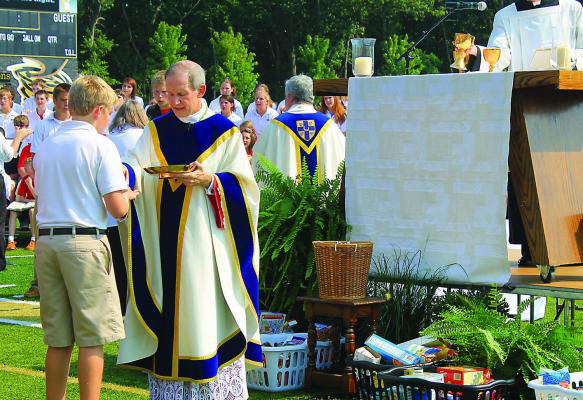 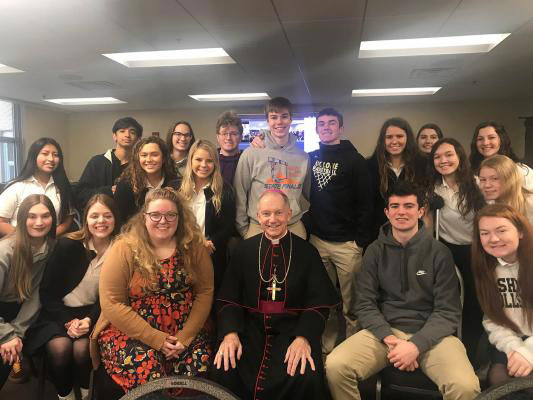 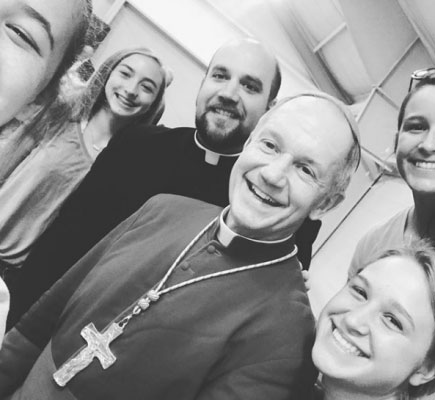 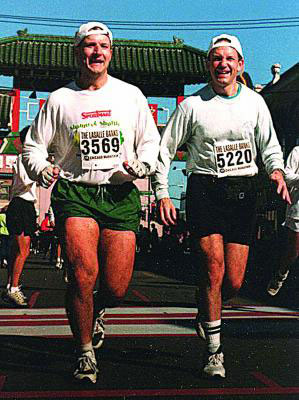 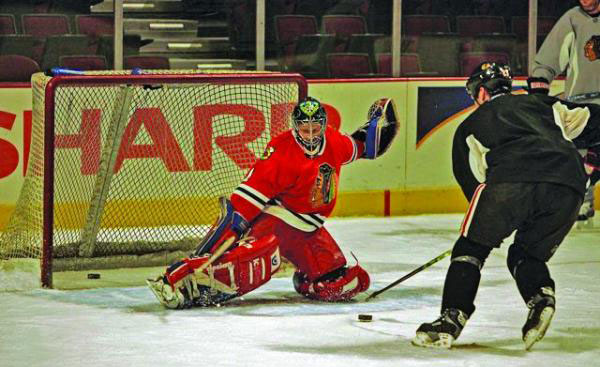 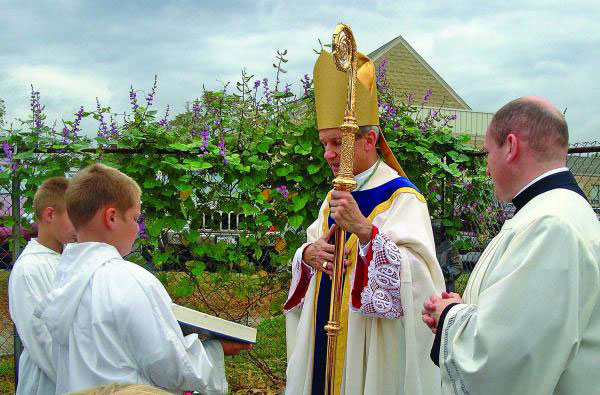 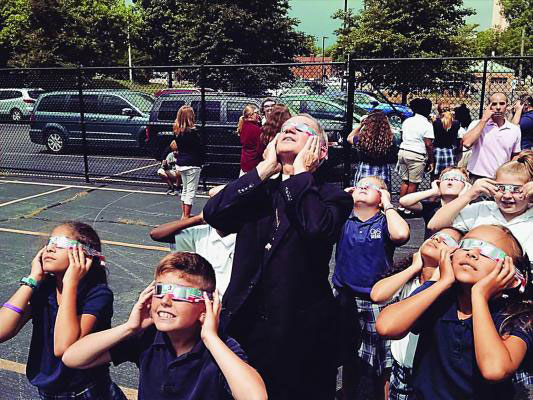 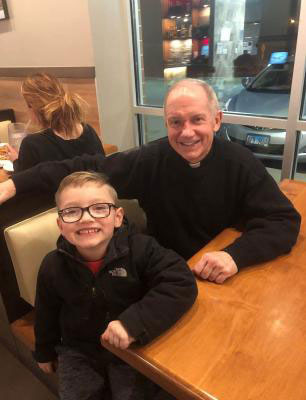 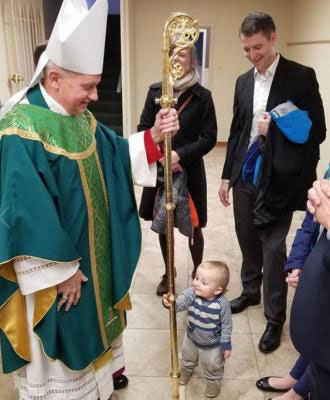 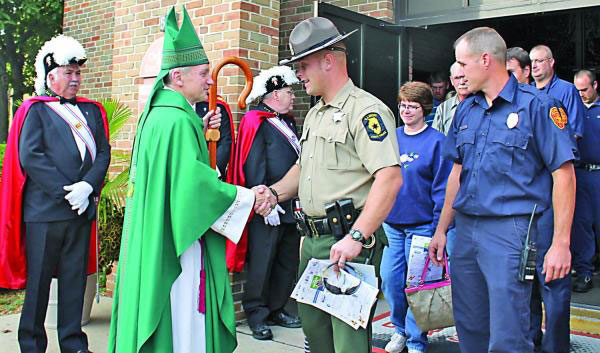 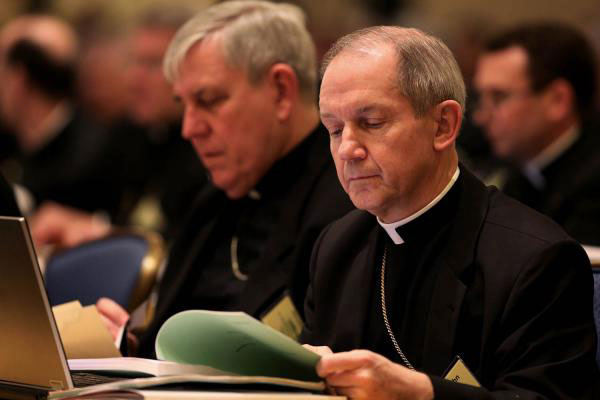 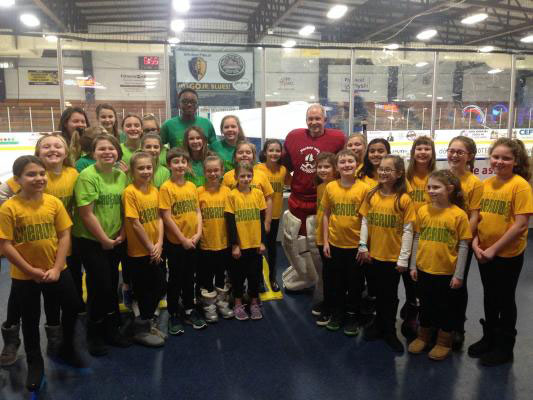 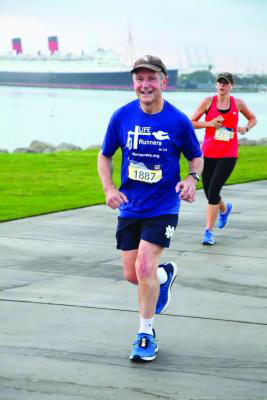 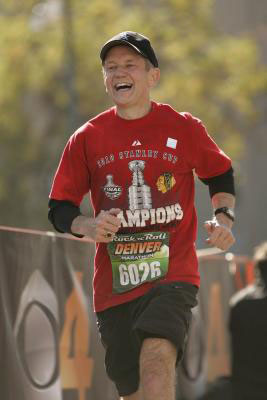 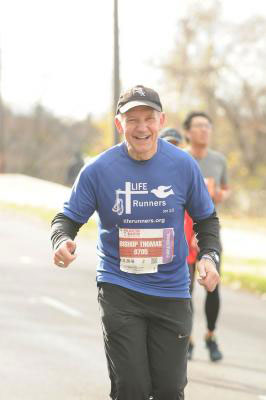 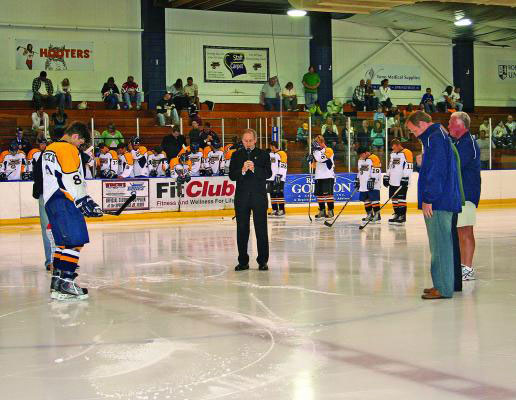 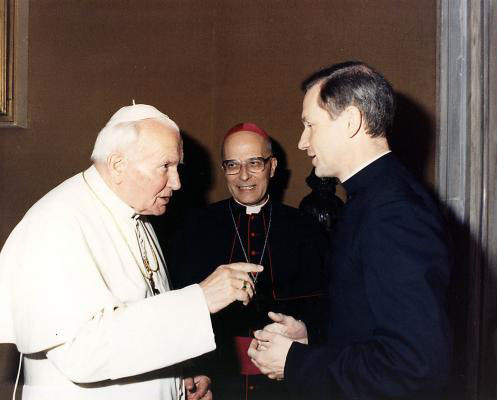 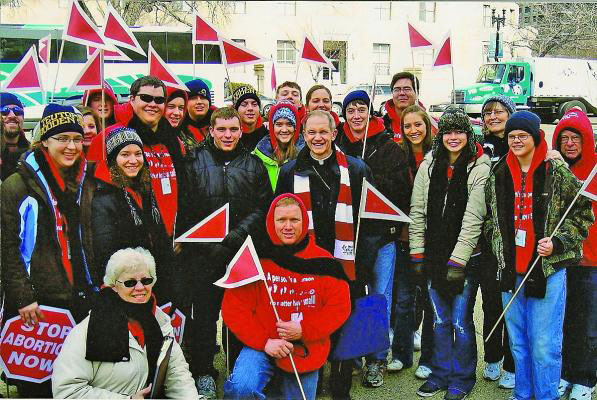 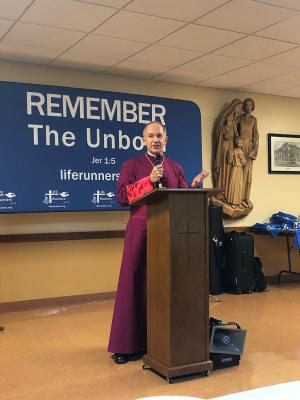 The episcopal heraldic achievement, or bishop’s coat of arms, is composed of a shield, which is the central and most important part of the design, a scroll with a motto and the external ornamentation. The design is described (blazoned) as if the description was being given by the bearer (from behind) with the shield being worn on the left arms. Thus, it must be remembered, where it applies, as the device is viewed from the front that the terms sinister and dexter are reversed.

By heraldic tradition, the arms of the bishop of a diocese, called an “Ordinary,” are joined (impaled) with the arms of his jurisdiction, in this case the Diocese of Springfield in Illinois, that are seen in the dexter impalement (left side) of the design.

These arms are composed of a gold (yellow) field on which is displayed a blue cross of The Faith. Within each quarter that is formed by the cross is a roundel of alternating blue and silver (white) wavy bars. Each of these roundels is known heraldically as a “fountain” and it is used to represent a small body of water, such as a pond or a spring. So, canting (playing on) the name of the See City, the background of the diocesan arms is a “field of springs;” thus, Springfield. At the center of the cross is a silver (white) crescent, to represent the moon, a classic symbolism for our Blessed Mother, in her title of the Immaculate Conception, titular of the Cathedral-church in Springfield, for as it is described in the Book of Revelation (Rev. 12:1), our Holy Mother has the “moon at her feet and upon her head a crown of twelve stars.”

For his personal arms, His Excellency, Bishop Paprocki continues to use the personal design that was adopted at the time of His Excellency’s selection to receive the fullness of Christ’s most holy Priesthood, as he was ordained as an Auxiliary Bishop for the Archdiocese of Chicago.

On a green field is seen a golden (yellow) lattice, a device in which many individual slats form a single, integrated device of strength, far greater than all of its components. By the use of this device, Bishop Paprocki expresses that all aspects of Christian life, theology, church law and civil law, social involvements, form a framework of the total Christian. On the lattice is displayed an ogress (a black circular device) on which is displayed a silver (white) cross patée. The cross, which thanks to the research and knowledge of the Reverend Mister Edmund Gronkiewicz (a Permanent Deacon of the Archdiocese of Chicago) has been determined to be the “clan symbol” of the Paprocki’s family in Poland and by its use His Excellency acknowledges, with great love and devotion, the heritage that has come to him from his parents, John and Veronica (Bonat) Paprocki. Click here to learn more about Bishop's Coat of Arms

Date and Place of Priesthood Ordination
May 10, 1978, Mundelein, Illinois